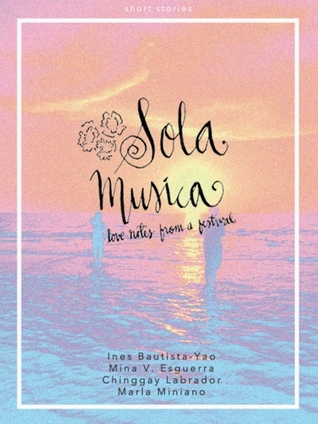 A beach cove, a hot summer weekend… SOLA MUSICA is where everyone’s going, to enjoy the best new music from all over. Bestselling Filipino YA/chick lit authors Mina V. Esguerra, Marla Miniano, Chinggay Labrador, and Ines Bautista-Yao each tell a story about this festival: the music, the people, the hearts that will soar (or break).

Jack is the go-to behind-the-scenes guy for electronica group, Box Trap, and finds himself inexplicably drawn to the lead singer he’s tasked to work with. (SPECTATORS, Chinggay Labrador)

Georgia wants to finally talk to Ken about this “thing” that’s between them, but he seems intent on avoiding it, even if they’re spending a weekend at a music festival together. (GEORGIA LOST AND FOUND, Mina V. Esguerra)

Gem has the chance to make her dreams come true and perform at Sola Musica, with one crippling problem: all her talent left her six years ago when a boy kissed her. (A CAPTURED DREAM, Ines Bautista-Yao)

Natalie is about to watch her favorite band in the world, with a guy she’s crazy about—if only she can get through forced family bonding with her grandmother, her little brother, and her grandmother’s boyfriend. (BREAK, Marla Miniano)